Looking For Something? Public documents

Info & Resources How do I?

Navigate thru all the sub categories of the website

We're located in the heart of the Palliser Triangle located in south-eastern Alberta, Canada. With 1.5 million acres of land and 7,502 people, we are a thriving municipality.

For demographics and other statistics, check out our Alberta Regional Dashboard page:
https://regionaldashboard.alberta.ca/region/newell-county/#/

The County of Newell has a full range of recreation, health, emergency, education, and cultural amenities. In addition, it offers the small community spirit that inspires a sense of belonging and provides a stable atmosphere in which to raise a family. The cost of living is generally more affordable than in larger urban centres.

For community information and entertainment/recreation within the County, visit:

The County of Newell is readily accessible to Canada's major east-west transport route (Highway 1 - Trans Canada), north via Highway 36 to connect the County to northern Alberta oilsands, and south via Highway 36 or Highway 875 to the U.S. border and I-15 - a major north-south trade route terminating at Los Angeles/San Diego. 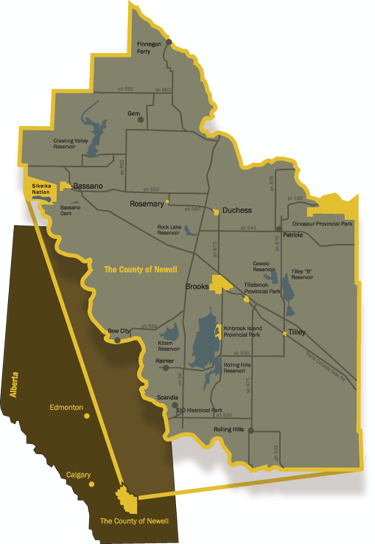 There are two primary Canada/U.S. border crossings south of the County of Newell:

The City of Brooks is a trucking centre with 14 transportation and hauling companies located in the City. The companies service local industry and are fully equipped to haul all products and goods to major freight centres and ports across Canada and the U.S.

CP Rail's main line (Montreal to Vancouver) runs northwest to southeast through Bassano, Brooks, and Tilley within the County of Newell, with the closest rail yard in Medicine Hat. From Calgary, there are lines heading north to Edmonton and south to the Canada/U.S. border at Coutts.

The County of Newell is mainly a rural community. However, we service eight hamlets within our boundaries.

Other municipalities within the County of Newell borders include:

How long have you been an All-Net client?

Fires may start easily and spread quickly but there will be minimal involvement of deeper fuel layers or larger fuels.